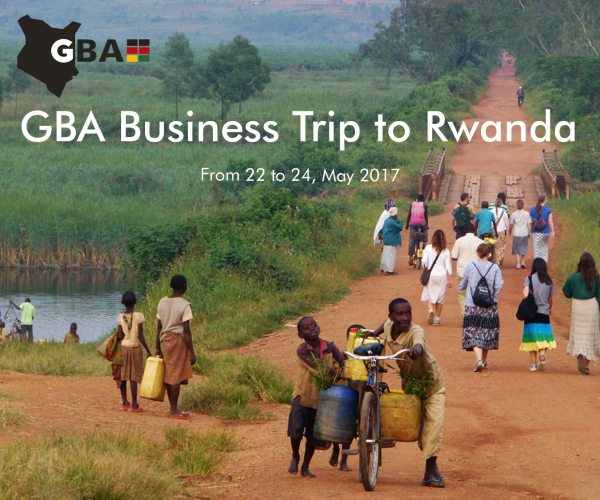 On Monday 22.05.2017 a delegation of 20 GBA members set out to the land of a thousand hills for the GBA Rwanda trip. Braving the morning cold, the team departed at 5am, arriving in Kigali at 7am.

22.05.2017: The trip kicked off at the German Embassy in Kigali with a briefing by the German Ambassador to Rwanda (Dr. Peter Woeste) who gave the team a general overview of the political and economic operating environment in Rwanda. After this, the delegation visited SKOL Brewery Limited where the participants got a tour of the beer manufacturing plant, followed by a beer tasting session. The last meeting of the day was with the board of the German Business Association in Rwanda, who shared their experiences as foreign investors in Rwanda. The evening ended with a joint dinner with invited GBA Rwanda member companies at the Park Inn by Radisson, Kigali.

23.05.2017: A very informative meeting was held with the Rwanda Development Board (RDB) on Tuesday morning. The meeting was led by the Head of Investment Promotion and Facilitation Department, Mrs. Winifred Ngangure. The presentation made by RDB can be found here. This was later followed by a visit to the Kigali Special Economic Zone, where the delegation had a site visit of a German company, STAWTEC, which provides low cost building solutions from compressed straw fibres. A visit to the Kigali Genocide Memorial Centre was made in the afternoon, giving the team an understanding of Rwanda’s history. The day ended with a reception at the German Ambassador’s residence, where the delegation and invited guests got a taste of some German delicacies and had an opportunity to network with each other.

24.05.2017: The morning session was free for delegates to have their individual B2B meetings with Rwandan companies and institutions. The team converged in the afternoon for a meeting with the Executive Director of the Rwanda Association of Manufactures, who explained how the manufacturing sector in Rwanda operates. The team then departed back to Nairobi later in the day.